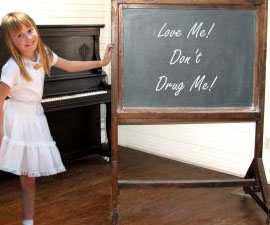 With over 5 million children under the age of 18 being prescribed Ritalin, straterra and even antidepressants to help manage their ADHD symptoms any parent or clinician whose child is on psychiatric medication needs to know how stimulants work for ADHD.

Prior to 1980 it was rare that children would be placed on psychiatric medications. But a few things happen in the history of ADHD that paved the way for children to become guinea pigs for psychotropic medications.

One would expect, with over 5 million prescriptions written for psychiatric drugs for children that they would be the ace in the hole for treating behavioral difficulties like those described as ADHD. But are the stimulants and other medications all they are cracked up to be? (No pun intended.) Instead we are finding some alarming facts since children began to be widely treated with medications.

If psychiatric drugs were working for children, what would you expect some of the research outcomes to be? Here are a few that come to mind:

Robert Whitaker takes on this question in his book Anatomy of an Epidemic and what he found was something very opposite one would expect if these drugs were working for children over the long haul.

What the Experts Are Saying About How Ritalin Works

One person he quotes is Russell Barkley, Ph.D. who has devoted his career as a psychologist to studying ADHD. In 1978 he had this to say about what Children on Ritalin display:

“A marked drug-related increase in solitary play and a corresponding reduction in their initiation of social interactions.”

In a later interview with PBS, Barkley, who happens to be a proponant of psychiatric interventions for children, had this to say about how stimulants work and specifically how ritalin works:

Now, as far as what they’re doing at the level of chemistry and proteins, we’re not quite sure yet. We do have some indications that the stimulants are achieving an increase in the amount of dopamine that is within the synapses between brain cells–those critical gaps between the brain cells where the neurotransmitters are supposed to do their job. Evidence indicates that drugs like Ritalin slow up how much of that chemical is being reabsorbed into the nerve cell, so that more is left in the synapse. Other medications, like Dexedrine, may just increase the production of dopamine within these nerve cells.

However they do it, the stimulants all have in common that more dopamine seems to be available within these critical brain regions to allow them to be more active, and to do the job of inhibiting behavior that they’re supposed to do.” (Emphasis added)

Do Not Be Deceived

Be very discerning as you read this. Barkley, one of the foremost experts in the area of ADHD is reporting that at least in the short term he believes the amphetamine drugs are working because children some how have an improved “power of inhibition.” However, and this is critical, he admits that at the biological and chemical level “we’re not quite sure yet” how the drugs work.

This means they do not quite know whether the drugs may be changing or injuring the the delicate brain neurons, synapses and structures over the long term.

Other observations about children on Ritalin come from a efficacy trials. In one study done by the NIMH they found that the drugs were highly effective in:

Clearly in one way the drugs are working to make these children less annoying to teachers and peers and therefore more socially acceptable. So on the surface it may appear that stimulants are “good” for hyperactive and easily distracted children. But is there more to this story?

Dr. Alan Sroufe a psychologist who has been studying troubled children for over 40 years in an article for the NY Times challenges us to ask “why we rely so heavily on these drugs?” He goes on to explain that:

“Attention-deficit drugs increase concentration in the short term, which is why they work so well for college students cramming for exams. But when given to children over long periods of time, they neither improve school achievement nor reduce behavior problems. The drugs can also have serious side effects, including stunting growth. ”

Sroufe also reported as early as 1973 that Ritalin enhances performance on “repetitive, routinized tasks that require sustained attention” however the higher brain functions of problem solving, reasoning and learning are not obviously improved.

Herbert Rie reported a few years later findings that supported Sroufe’s, saying that Ritalin did not produce any lasting benefit for children in the academic areas of “vocabulary, reading, spelling, or math” and that “the reactions of the children strongly suggest a reduction in commitment of the sort that would seem critical for learning.”

The major benefit of stimulant medications, says Dr. Russell Barkley, seems to be “an improvement in classroom manageability rather than academic performance”

It is widely known that regarding Ritalin and other stimulant medication for ADHD such as Adderall, Dexedrine and Concerta there is no evidence for positive effects on behavior past the first several weeks. Psychiatrist, Peter Breggin, MD writes in the introduction of his book, Your Drug May be Your Problem that:

“Few professionals or consumers realize how addictive the drugs can be and even fewer realize that they frequently cause serious psychiatric side effects such as psyhcosis, maia, aggression, and suicide.”

In conclusion it appears that stimulants do not work efficaciously in the long term for children who use them. The research shows that they may be helpful in the short term for helping children to focus on repetitive types of activities but that stimulants do not work to help provide long term academic success, improve self worth or sociability. According to Whitaker’s findings this is just the tip of the iceburg.

Since children began to be widely medicated in the 1980’s mental health issues in children have skyrocketed. In fact a new and frightening trend has entered into child psychiatry called juvenile bipolar illness. Bipolar is a mood disorder that was unheard of in children only 50 years ago. And it’s not just bipolar, it is the worst type of bipolar illness that is showing up, a type called rapid cycling which is being diagnosed in children as young as two years old. Interestingly, many children who were first diagnosed with ADHD and medicated with psyhciatric drugs are later being diagnosed with this severe mood disorder. Is there a connection?

For more information on the trend of mental illness in children check out Robert Whitaker’s book Anatomy of an Epidemic: Magic Bullets, Psychiatric Drugs, and the Astonishing Rise of Mental Illness in America.